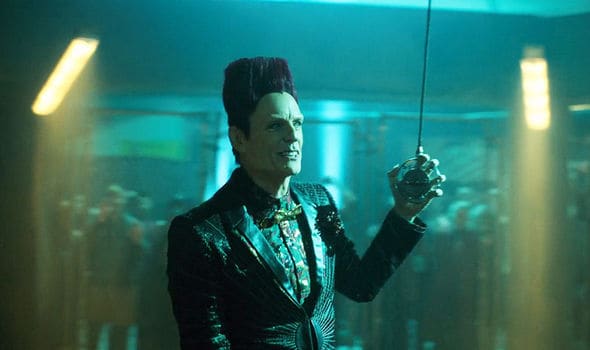 If I say the name “Matt Frewer” some folks might get this dumb look on their face and try to figure out just who in the heck I’m talking about. But for those of us that remember he’s one of the most entertaining actors around and has been for a long time now. He’s definitely one of those individuals that you celebrate because he’s been a character in so many shows and films that you love to see but don’t always figure is needed, a jobber to some and a character actor to others. But all in all he’s someone would be missed if he decided to retire since he’s put forth some truly great performances over the years and has nailed the roles he’s been given without any hesitation it would seem.

Here’s one of my personal favorites.

So quite honestly the miniseries didn’t quite live up to the book, as you might have guessed. But his role as Trashcan Man, a serial arsonist and someone that was about as loosely wound as a ball of yarn in a room full of cats, was dang near perfect. From his facial expressions to the final way in which he brought the downfall of Randall Flagg and Las Vegas he was the perfect man for the role. He had the perfect look and his mannerisms were spot on since he reacted in ways that might make a lot of people wary of him and think that he’s a bit off his rocker. But Matt has been the kind of guy that’s been able to embrace a role with such fervor that for the duration of the film or show you honestly forget that it’s him and start to think that he has become that character in a way that is hard to fathom but enjoyable to see. Trashcan Man though was definitely a disturbing character since he was just as much of a danger to his allies as he was to his enemies, and his penchant for playing with fire knew absolutely no bounds since if it could burn he was bound to it in a way that is hard to explain with just words.

Here’s another performance that was shorter but no less impressive.

The clip I wanted was of Matt’s final demise when it’s been surmised that he’s been bitten. He’s well aware of his fate and has informed his daughter as she then goes off crying. He’s guarded by Ving Rhames’ character who’s watching to see as he passes and then turns into one of the undead, and it’s an emotional moment since it couldn’t possibly be anything else considering that he was thought to be another survivor and was already marked to become one of the zombies since he’d been bitten. Anyone that’s ever seen a zombie movie knows that this is a death sentence for any character no matter who they are, with very few exceptions ever having been noticed. But his death scene comes as a rather sad point in the movie and while his character takes it with as much grace as possible it’s still highly emotional and tends to serve as a kind of interlude before the rest of the movie gets going.

Now here’s one that a lot of us should remember, and for you youngsters it’s a bit of history so pay attention.

It might seem kind of creepy now, but in truth it was kind of creepy back when it first came out. But still, Max Headroom was still something that a lot of people absolutely enjoyed since it was brand new and somehow dynamic enough that it caught the attention of a nation for a while and even went worldwide for a bit. This was one thing the 80s were definitely known for since Max was insanely popular and was a sign that a new age was dawning and it had a lot to do with technology. If you didn’t know about this guy in the 80s then it was likely that you didn’t watch a lot of TV or spend any time paying attention to what was new and happening. He was set up to appeal more to younger viewers since the older population didn’t fully understand him and might even have seen him as kind of mockery of their way of life and how they’d come up. But however you saw him, Max was something interesting, shiny, and new for a while. In fact he’s still a part of pop culture since he showed up in the box office flop Pixels in 2015.

It’s easy to see how people look past him sometimes since he is a supporting character more often than anything, but the kind of support he offers is great enough that it seems that we would miss him if he up and retired without notice.