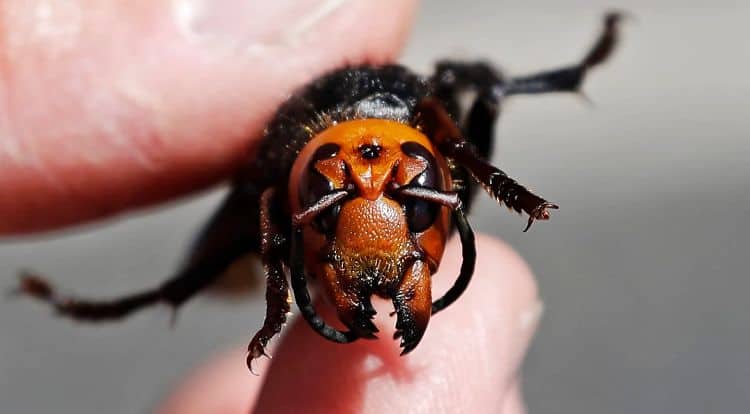 Well hello again 2020, what fresh terror do we have today? Ah yes, the ‘murder hornets’ that have come directly from Asia to remind us that there are indeed worse thing than a disease that….also..comes..from Asia. Is there some conspiracy that’s been brewing in the far east for a while now or is it just really, REALLY bad luck that’s affecting the rest of the world when it comes to anything coming out of Asia? Of course that’s a generalization since the coronavirus came from Wuhan, China, and the current concern that has people so worried that they’re actively making a laughable horror movie of it are the Asian ‘murder hornets’ better known simply as the Asian giant hornet. It’s a simple name for something that measures 2 inches at its largest and has a stinger that can, in extreme cases, kill a person. It’s already been tried out by Nathaniel Peterson, a YouTuber known for purposefully taking the sting of several insects to see just how badly they hurt. Sounds crazy, right? Well, according to Rachel E. Greenspan of Insider the sting of the Asian giant hornet has given him the idea to stop being stung for a living since the searing and intense pain was so horrifying that his writhing and moaning on camera might be kind of hard for some people to watch. But hey, now what we have footage like this, it’s time to make a movie, right?

That’s right, a movie that’s predicated on the fears that the human psyche is all too capable of elevating to 11 and beyond has been made and much like the Sharknado series it does tend to make a person think that it’s about to be all kinds of ridiculous. Thankfully that’s the point though since really if people want something to be afraid of , ‘murder hornets’ are kind of silly since judging by what Lauren Frias and Rosie Perper of Business Insider have relayed, the only real sightings of these nasty little buggers has been around Vancouver Island to as far as Blaine, Washington, and their numbers haven’t been reported to be so massive that people should be concerned at this point. But the human reaction to such things is, as most should know by now, to panic and wonder just what might happen if these insanely big hornets were to actually swarm over the US. Well, to be fair, they might actually make the effects of the coronavirus look positively tame since in all likelihood the sting of just one of these things could send a person to the hospital, while multiple stings might leave people writhing on the ground before succumbing to shock and death that would follow close behind.

But hey, onto the movie. As you can already guess it’s going to be loads of campy, ridiculous footage that will feature people being attacked by swarms of angry hornets that are apparently out for blood and are going to be killing people left and right. Some might find this in bad taste while others are bound to think that it’s hilarious simply for the shock and awe value, kind of like Sharknado or any other movie that’s not at all plausible but feeds off of the fear of the people in a way that makes it possible to get at least some attention. As Kevin Burwick of MovieWeb has relayed this movie is expected to come out June 1st, which means of course it’s going to be something slapdash and entirely corny, but still likely worth a look to many individuals that can’t help themselves and might have even found 5G Zombies to be worth the time and effort. Unlike the little-known 5G conspiracy though, Asian murder hornets are a very big reality and as has been seen they’re more than a little dangerous since in the manner of most hornets they can sting multiple times without losing their stinger as a bumblebee could, and their size alone is enough to unnerve a lot of people since two inches might not sound like a lot, but considering the lethal nature of the venom that these things are packing it’s still something to be wary of despite the fact that the ‘invasion’ is not nearly as bad as people are claiming at the moment.

Fear and paranoia are great for a horror movie since writers and directors can build off of this and make it into something that will entertain and in some ways calm the minds of many since they can see for themselves that as real as something can be, the idea of putting it on screen can sometimes lessen the sting, no pun intended I swear, of the reality that it represents. At this time the ‘invasion’ of the Asian giant hornet is being carefully monitored, so hopefully 2020 won’t offer up any more surprises.