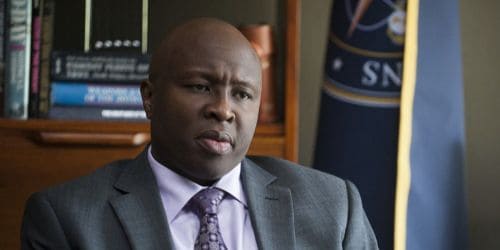 Over the course of his more than 30 year career, Steve Harris has made dozens of on screen appearances. From the big screen to the small screen, Steve has taken on a wide variety of roles and he knocks them out of the part every time. He is best-known for playing Eugene Young in The Practice which ended in 2004. Since then he has had a number of guest and recurring role, but now he’s back with a main role in the new TV series, Filthy Rich. Not only does this show give Harris’ longtime fans a chance to see him in action again, but it’s also the perfect opportunity to introduce his skills to a whole new audience. Keep reading for 10 things you didn’t know about Steve Harris.

1. He Is A Chicago Native

Steve was born and raised in Chicago and comes from a close knit family. He is very proud of his midwestern roots and his home town has played a very important role in his life. Once he moved out of the city and went to college, he began to focus on building his acting skills.

2. His High School Was Featured In The Documentary Hoop Dreams

Basketball fans everywhere know that Hoop Dreams is arguably one of the greatest basketball documentaries of all-time. The 1994 film followed two high school basketball players from Chicago as they worked towards their dreams of getting to college and eventually becoming professional athletes. William Gates, one of the players featured in the film, attended St. Joseph High School in Westchester Illinois which is also where Steve went to high school.

3. His Brother Is Also A Successful Actor

Steve is the older brother of actor, Wood Harris. Wood has also had a very successful career and has appeared in dozens of films and TV shows. He is probably best-known for his role as Avon Barksdale in the critically acclaimed series, The Wire. Wood has also performed stand up comedy.

4. He Was A College Athlete

St. Joseph’s High School was well-known for producing top notch athletes and that’s exactly what Steve was. After a successful high school football career, he went on to play football at Northern Illinois University. Unfortunately, his career ended early after a serious ankle injury.

Social media has become a very popular tool for actors and other entertainers because it’s essentially a free marketing tool. However, building a large following on social media doesn’t seem to be one of Steve’s goals. He has only posted on Instagram 23 times in the last two years and he currently has just over 4,100 followers.

6. He Has A Master’s Degree

Steve is definitely the type of actor who believes in the importance of a formal education. After graduating from Northern Illinois University with a bachelor’s degree in drama, Steve knew that he wanted to continue to pursue his acting education. He went on to earn a master’s degree in acting from the University of Delware.

As a creative person himself, Steve has lots of love and appreciation for the arts. He’s a big music fan and says that he likes to listen to songs with lyrics that he can relate to. As a result, he prefers old school hip hop and especially loves old school R&B such as Kenny Lattimore and Donny Hathaway.

All of the work Steve has put into acting over the years definitely hasn’t gone unnoticed by those in the industry. During his time on The Practice he received several award nominations. Most notably, he was nominated for two Emmy Awards for Outstanding Supporting Actor in a Drama Series.

9. He And His Brother Have An Online Pop Culture Show

Steve and Wood may work in the same industry, but they haven’t let the cut throat culture of Hollywood interfere with their relationship. The two are very close and even started an online show together called StevexWood. During their segments they would talk about different topics such as sports and music. Unfortunately, they haven’t uploaded any new content in almost two years.

Steve isn’t afraid to speak out about the things that are important to him, and politics is one of those things. Although he doesn’t post very often on social media, he has made it very clear through his Instagram account that he is not in favor of President Trump and he encourages his followers to get out and vote.