Home MOVIE What the Heck Is Going on with Power Rangers These Days?

Do you remember Power/Rangers?Â  Not Power Rangers, the TV show about a team of super-powered teenagers who fight evil using dinosaur mechs.Â  Power/Rangers, a Power Rangers fan film that hit YouTube in 2015 and was pretty much the only thing anybody wanted to talk about for weeks after the fact.

The fifteen-minute fan film’s central premise was turning everything that we loved about the series as kids on its head.Â  Instead of rainbow-colored rangers wielding over-sized props and fighting henchmen in grey leotards, we got a gritty, Michael Bay-like continuation of the series where evil won, the Power Rangers disbanded and a Rocky (the Red Ranger) brutally interrogates Kimberly (the Pink Ranger) to find Tommy (the Green Ranger). 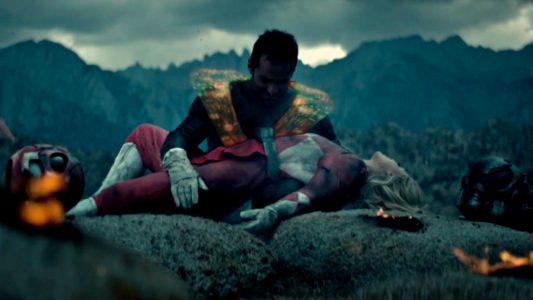 It asserts that Zordon weaponized children to fight a war that they were unprepared to takes sides in and lingers sadistically on Rocky’s prosthetic leg, Zack (the Black Ranger) doing lines of post-coital coke and Billy (the Blue Ranger) committing suicide.Â  It was ridiculous; it was over-the-top; it took the series — and the idea of grimdark Hollywood reboots — to its logical extreme.Â  That was the joke: Power Rangers stripped of anything even remotely resembled the series it was based on.

The problem was that Hollywood didn’t just watch the video, but took notes on it.Â  The new Power Rangers movie — set to come out next month — is virtually indistinguishable from the bombastic Bayhem that came out two years ago lampooning the idea.

What’s more, following the movie, there’s going to be a “really […] dark” reboot of the tv series.Â  It’s also going to be headed up by Adi Shanker, the producer of Power/Rangers.

This is Poe’s Law, where what’s being parodied becomes indistinguishable from what’s making fun of it.Â  They made a dark Power Rangers because it made a statement about how out-of-hand these gritty remakes have gotten.Â  They ended up causing an irreparable shift in how studio heads could exploit the franchise.

I’m not against the idea of a more mature Power Rangers.Â  The original series was silly even by the 90’s standards: cheaply made, garish and appealing only to very young children.Â  As that original audience grew up, so too should the series: but not at the total expense at what drew people into that franchise to begin with.Â  Maturity does not only mean dark and moody.

Just look at how mature the latest entries in the Marvel Cinematic Universe have been, and those still draw in children and families because they’re fun and accessible.Â  I liked Power/Rangers as much as the next guy, but I don’t think that that’s the direction the series should go in.Â  It was funny because of how outside of the franchise’s wheelhouse it was, and the people who made the film knew that.

I want the new movie to succeed, just like I want to new series to.Â  I just don’t see that happening when they produce Power Rangers in name only.Â  They need to keep the spark of the original series alive if they hope to keep old fans coming back, let alone draw a new generation into the fold.