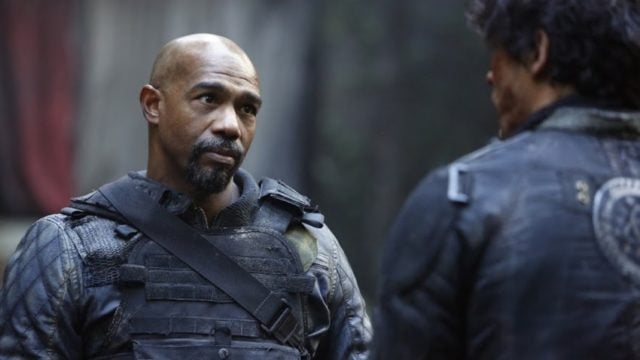 If you’ve been watching the 100 then you’ve seen Michael Beach more than once and you’ve probably wanted to punt him across the room multiple times. Playing the role of Pike in the show, he’s one of the absolute worst type of people, the one that can reason his despicable actions away with the rationality of a man trying to survive and defend his people. But this isn’t Beach’s only role, as he’s had plenty of success in TV and in film. While he’s not a major superstar he is in fact one of those that tends to stick around and amass one experience after another on his resume, which is quite impressive in itself.

Here are a few things you might not know about Michael Beach.

5. He attended the Juilliard School of Drama in NYC.

Not every actor you see gets to attend this school. It is high-priced, very prestigious, and doesn’t just take anyone. Think about that when you see these superstars that seem to skate from one movie to another. They didn’t all start in the top schools with the best instructors, which is probably why they’re kind of hit and miss from time to time. Guys like Beach went to a top notch school and are as solid as they come in their roles.

Beach played T.O. Cross, the leader of the Grim Bastards in Sons of Anarchy. Â He wasn’t the strongest character in the show and he came in the later seasons, but he was on point and able to hang in with the rest of the crew. His character’s real name, Tadderius, was something that no one ever dared call him to his face, as he would challenge that unfortunate individual in a heartbeat. Ratboy almost learned that unfortunate lesson, but thankfully T.O. was good enough to give him a warning.

3. He never expected to be an actor.

It’s funny the way life works out sometimes. Shortly before he learned that he had a knack for acting, Beach was an athlete that had no real thought about honing his thespian skills. Maybe it’s better that he did, otherwise we wouldn’t have had one of the most vile characters to despise and one of the most personable good guys to root for. Now that would have been a loss.

2. He had an appearance on an episode of Law and Order: SVU.

The list of actors and actresses that have made an appearance on this show is seemingly endless, and it always seems like the guest star is in the wrong or is made to be the victim. Beach is no different since in a way he is very much responsible for his on screen wife contracting AIDS. It’s not really worth going into how this happened, but his obstruction of justice and habit of keeping secrets forces him to lose nearly everything.

1. His mother was an MIT-educated city planner.

If you ever wonder where Beach got his work ethic and his intelligence look no further than his mom. Â Divorced and raising four kids on her own, Beach’s mother managed to provide for her family and raise them with very traditional values that obviously followed him into his professional career. Sometimes the hardest working actors are the ones that garner the least notice. But those are often the people that serve as the backbone for the industry.

Micheal Beach isn’t the top star of anything really, but he’s impressive all the same for all that he’s done. His acting skills are good enough that you either love his character or hate him. That makes him one of the better actors in the business today.