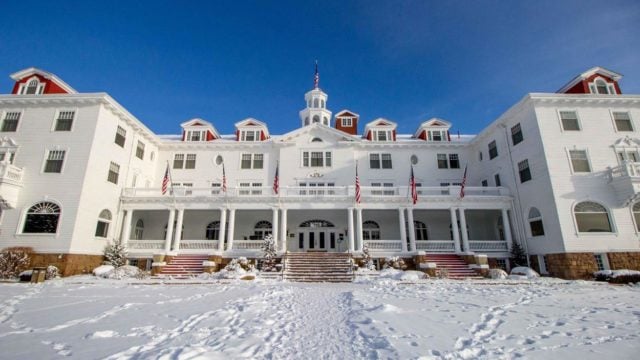 Hotels are places that you generally get a weird feeling from, but there are some super creepy stories from the real hotel that inspired The Shining. The Stanley Hotel has been up and running for a good long while and has accumulated it’s fair share of ghost stories. The hotel won’t bother commenting on anything having to do with the paranormal as it could be bad for business or their reputation, but as people have already found out there is something spooky going on in the hotel and it has nothing to do with being a little out of it as far as intoxicants go. Well, almost nothing.

A lot of the stories in the link above have to do with the band Murder by Death, who have used the hotel as one of their venues to push their band and have as a result experienced the creepy phenomena that have occurred in the hotel. One such encounter had to do with a group that was having dinner when one of them stopped speaking mid-sentence and asked aloud who had just touched her shoulder. The others that were seated near her had been watching the whole time and there was no one in the room. If that wasn’t creepy enough the woman was going through airport security the next day when something chimed and she had to stop. Upon looking at her x-ray she saw a dark mark on her shoulder, exactly where she’d felt the touch.

Another story goes that Tyler, the bass player for Murder by Death, was having an odd dream in which he was grappling with a man but couldn’t get any leverage against him. Unfortunately when Tyler woke up he could still see the man, but couldn’t move. The man was pinning him down, keeping him immobile. Eventually Tyler shook this off, though he couldn’t sleep for the rest of the night. Other stories of whispers, strange noises, and ghostly apparitions trying to point the way through the halls have been revealed as well, though skeptics have done their best to shut these down. The hotel doesn’t want to spread the rumors and the people that have recounted the tales have only told so many people of what happened, so eventually it becomes more a tale and less a reality. But the truth of it is that some places, like it or not, are imbued with the type of latent energies that allow for this type of phenomena to occur.

Whether it’s ghosts from the other side attempting to mess with those on this plane of existence or something else that we don’t know or possibly understand, the truth is that there is a lot in this world that is still unknown to humanity, and a lot that is not to be messed with. Some spirits, if that is what they are, seem rather harmless and are more apt to spook people rather than cause any harm. But just as there are malevolent beings in this world, there are bound to be a few of them in the next one as well.